David Lust is the recipient of The Exceptional Lawyer of the Year Award from the Pennington County Bar Association.

Exceptional Lawyer of the Year

On May 4th, during the Pennington County Law Day Banquet, David Lust received the 2018 Exceptional Lawyer of the Year award. Awardees are nominated by their peers and recognized by the bar for their "integrity, leadership and exemplary service to the community and the bar".

David's work for the community includes serving ten years in the South Dakota House of Representatives, where he was elected House Majority Leader from 2011-2014.  As a Representative, he worked to represent the best interests of his constituents while creating laws that benefit the bar as well as the public.

Talbot Wieczorek, a managing partner with Gunderson Palmer and colleague to David Lust, captures in a few words why David is deserving of this award, “It’s hard to believe that he could serve in all these capacities in the approximately 20 years since he has graduated law school. He has only been able to accomplish this by being selfless with his time and giving back to this community and to the state.” 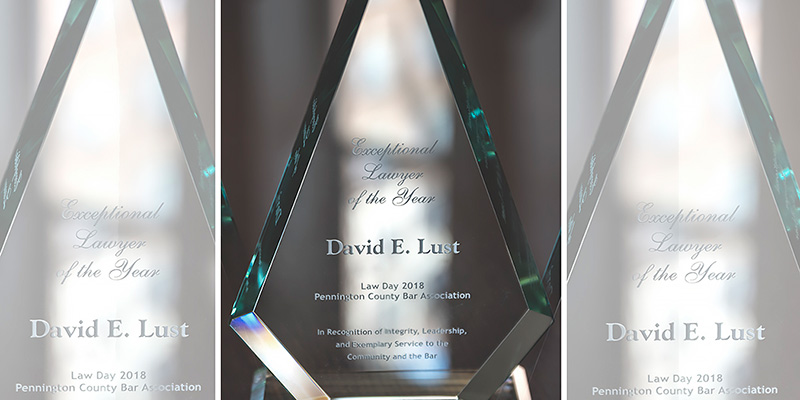 Talbot J. Wieczorek, one of the managing partners of Gunderson, Palmer, Nelson & Ashmore, LLP, has been with the firm since 1991. He specializes in representing individuals and businesses in Real Estate matters, Complex Litigation, and Business Issues.