Meet Gunderson, Palmer, Nelson & Ashmore, LLP's front desk receptionist and registered agent administrator, Monae Johnson, in our staff spotlight! Monae was raised in Rapid City and has worked for businesses such as Simpson’s Printing, KSLT/KLMP Radio, and United Blood Services.  She lived in Pierre and worked for Chris Nelson, SD Secretary of State as his receptionist and pistol permit administrator from 2003 to 2007.  After moving back to Rapid City, she started her own business, The Working Woman’s Assistant as a personal assistant, house cleaner/organizer, and errand-runner.   In the Spring of 2015, she started working part-time for Shantel Krebs, SD Secretary of State as her Administrative Coordinator.

Monae’s passions are her six children, four grandchildren, music, baking, friends, and traveling.  She recently returned from her second trip to Israel and would like to visit Europe next, especially France.  Monae was named after Claude Monet, the French Impressionist, and wants to see his homeland and the places that inspired him to paint.

At Gunderson, Palmer, Nelson & Ashmore, LLP, we are glad to have Monae on our team! 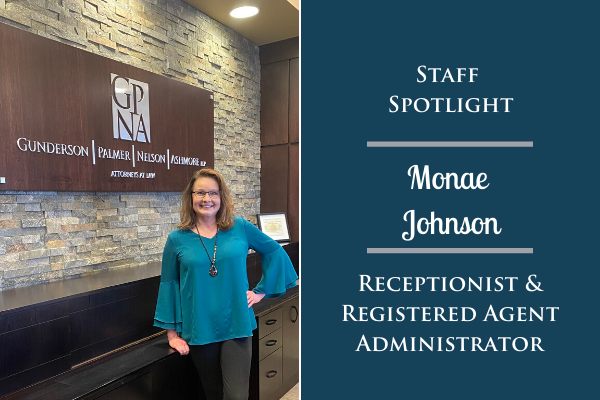